States Attracting Most New Taxpayer Income in 2013 are Florida, Texas, South Carolina; New York, Illinois and California Lose the Most

Recently released data from the Internal Revenue Service shows that state-to-state net migration (total in-migrants minus out-migrants) of Total Gross Income is the highest for Florida, which gained a net of $8.2 billion in 2013 from new taxpayers relocating from within the US. Texas attracted $5.9 billion net new Gross Income, followed by South Carolina ($1.6 billion), North Carolina ($1.5 billion) and Arizona ($1.5 billion). 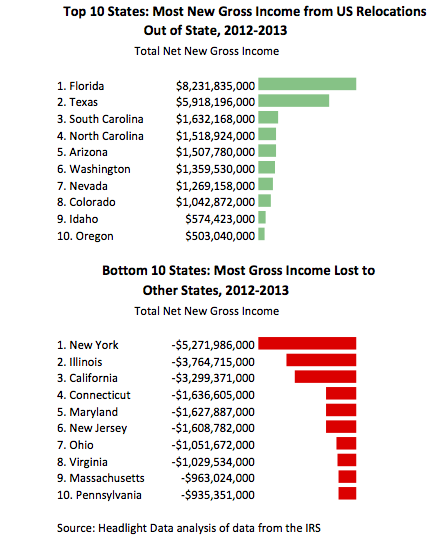 This map shows total net migration into individual US states from 2012-2013 based on IRS tax return data. Migration can be measured in terms of total returns, total exemptions, and total gross income. Net Migration is measured as the difference between in-migration into the state and out-migration from the state for people living inside the US.

Select a metric to see net migration flows for that state. Float your cursor over a state to see the actual value.  Click here to see a map showing State-to-State Migration Flows. If you don’t see a map below, Click here to see it in Tableau Public.

This map shows migration trends between states from 2012-2013 based on IRS tax return data. ... Read more