Recently released data from the Bureau of Economic Analysis illuminates which mid-sized metros have the fastest growing Gross Regional Product (GRP). Growth is measured by the percentage change in GRP between 2010 and 2015. Headlight Data ranks growth for the 52 mid-sized metros (500,000-1,000,000 people) in the U.S.

In the last five years, Gross Regional Product grew 21% in the United States. Among mid-sized metros, the highest growth is found in Provo (34%). Fayetteville (30%), Cape Coral (29%), and Des Moines (28%) follow. Other mid-sized metros with rapidly growing GRP are Charleston, McAllen and Toledo.

Growth has slowed in fourteen large metros since 2010. The mid-sized metros with the largest decreases in growth rate are Durham (35 pt. decrease), Bakersfield (-19 pts.) and Wichita (-10 pts.). Other metros with a declining 5-year growth rate since 2010 are Jackson, Syracuse and Little Rock. 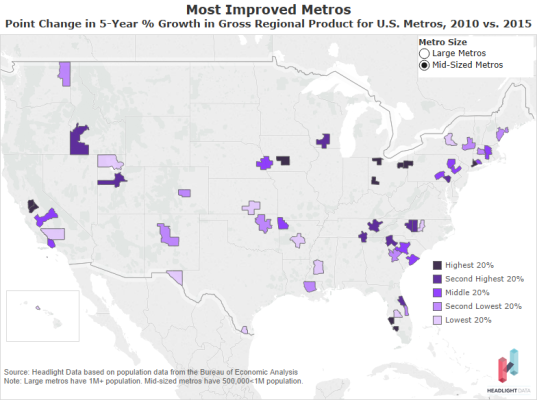