Recently released data from the U.S. Bureau of Labor Statistics show the mid-sized metros with the fastest growing wage levels. Growth is measured by the percentage change in average annual salary between 2014 and 2015. Headlight Data ranks salary growth for 52 mid-sized metros (500,000 up to 1,000,000 people) in the U.S.

Having trouble viewing this map? Click here to open it in a new tab. 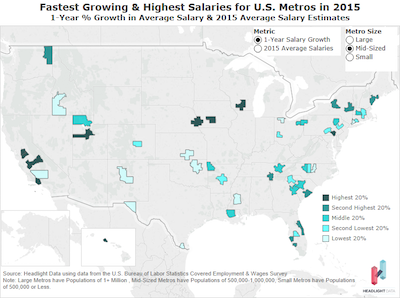 Recently released data show that construction job creation in 2015 across all counties in the ... Read more