Among large metros with 1 million or more population, Boston, San Jose, DC, and San Francisco have more than 50% of millennials (25-34 year of age) with a Bachelor’s degree or higher. Boston had the highest percentage, with 55% of millennials having finished a 4-year degree. 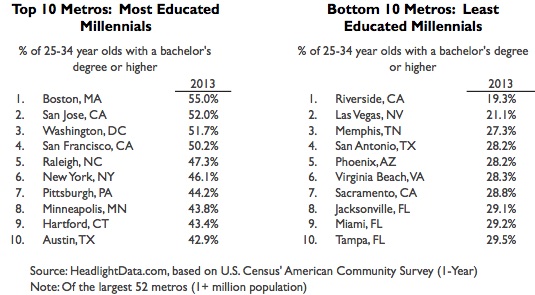 The vast majority, 83%, of large metros saw an increase in their percentage of educated young adults since 2009. The most improved metro over the 2009-2013 period was San Jose, which saw a 6.2 percentage point increase in the percentage of its millennials with college degrees. Denver, Hartford, Dallas, and San Antonio also experienced large increases.

Fastest Growing Manufacturing Metros of 2014: Two-thirds of US metros increased their manufacturing job base in 2014; Merced-CA, Danville-IL and Flint-MI grew the fastest while Detroit, Dallas, and San Jose created the most new manufacturing jobs

BEST AND WORST JOB MARKETS FOR WOMEN: Unemployment rates are lower for women than men in 8 of 52 large metros, led by Oklahoma City, Nashville, and Austin