Final revised numbers for 2014 (Jan. ’14 – Jan. ’15) show that 322 out of 372 metros grew their employment base. Texas metros Midland, Longview, Dallas, and Houston were among the Top 10 fastest-growing metros of 2014, led in part to a booming energy sector that has since slowed. Other southern metros in the Top 10 include Lake Charles-LA, North Port-FL, and Orlando-FL. Northern metros Elkhart-IN, Greeley-CO, and Holland-MI rounded out the Top 10 list. 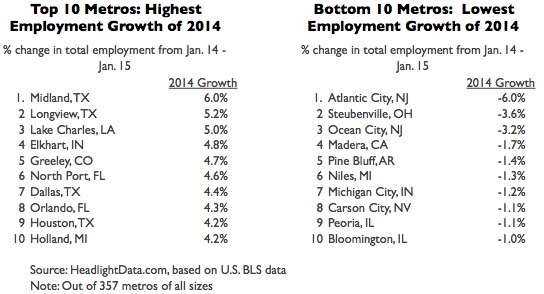 Fastest Growing Manufacturing Metros of 2014: Two-thirds of US metros increased their manufacturing job base in 2014; Merced-CA, Danville-IL and Flint-MI grew the fastest while Detroit, Dallas, and San Jose created the most new manufacturing jobs